It isn’t very often something truly new comes to market. All right we’ve seen folding phones before, but not one this particular way, and not one available to the  mass market. The Galaxy Fold was horrendously expensive and had some longevity concerns, and as yet you can’t buy the Moto Razr other than on an expensive 24 month contract on EE. So when the chance came for me to not only get hands on with one but use one – I got a tad over excited.

Ok, the Galaxy Z Flip has some longevity concerns of its own, but I don’t think that is enough to dismiss such a new device.  It’s easy to be dismissive of something that doesn’t fit into your vision of what a device should be. Yet all others around me got excited when I first took the phone out of the box and that speaks volumes. All the insides of the Z Flip box are standard Samsung, yet when you take the phone out and peel off the plastic, something entirely different happens.

The device feels sturdy and reassuring, well built and engineered, but not bulky or uncomfortable. Not only much more comfortable and lighter than an iPhone 11, but considerably taller and slimmer. I am reminded of the memes that were made around the time of the iPhone 5 launch, and when you use a device like the Galaxy Z Flip and indeed the Note10 line, it shows how right Apple were back then. A slimmer taller screen is better in almost every way.

Real Talk After The Fold

The folding screen of the Z Flip is both marvelled and ridiculed at each point by technology commentators, but you can’t argue its usefulness. You may scoff and think that the Galaxy Fold is a much more useful device, but that the Z flip does allow me to have a 6.7″ screen device, but not feel one in my pocket. When not in use the device slims down to about the same size as a coaster, all be it a heavier one that feels a little weird in your pocket.

When in use the screen is comically tall, there is no getting around it. One handed use can be a little clumsy if the app you’re using is top-heavy, but a tall screen gives you a great way to consume written content, be it social media, emails or blog posts. I love reading on this device because it’s much more suited to 90% of web usage and fits nicely in your palm. The screen itself is bright and vivid, some will scoff at it ‘only’ being 1080p but it does it’s job well with no issues. 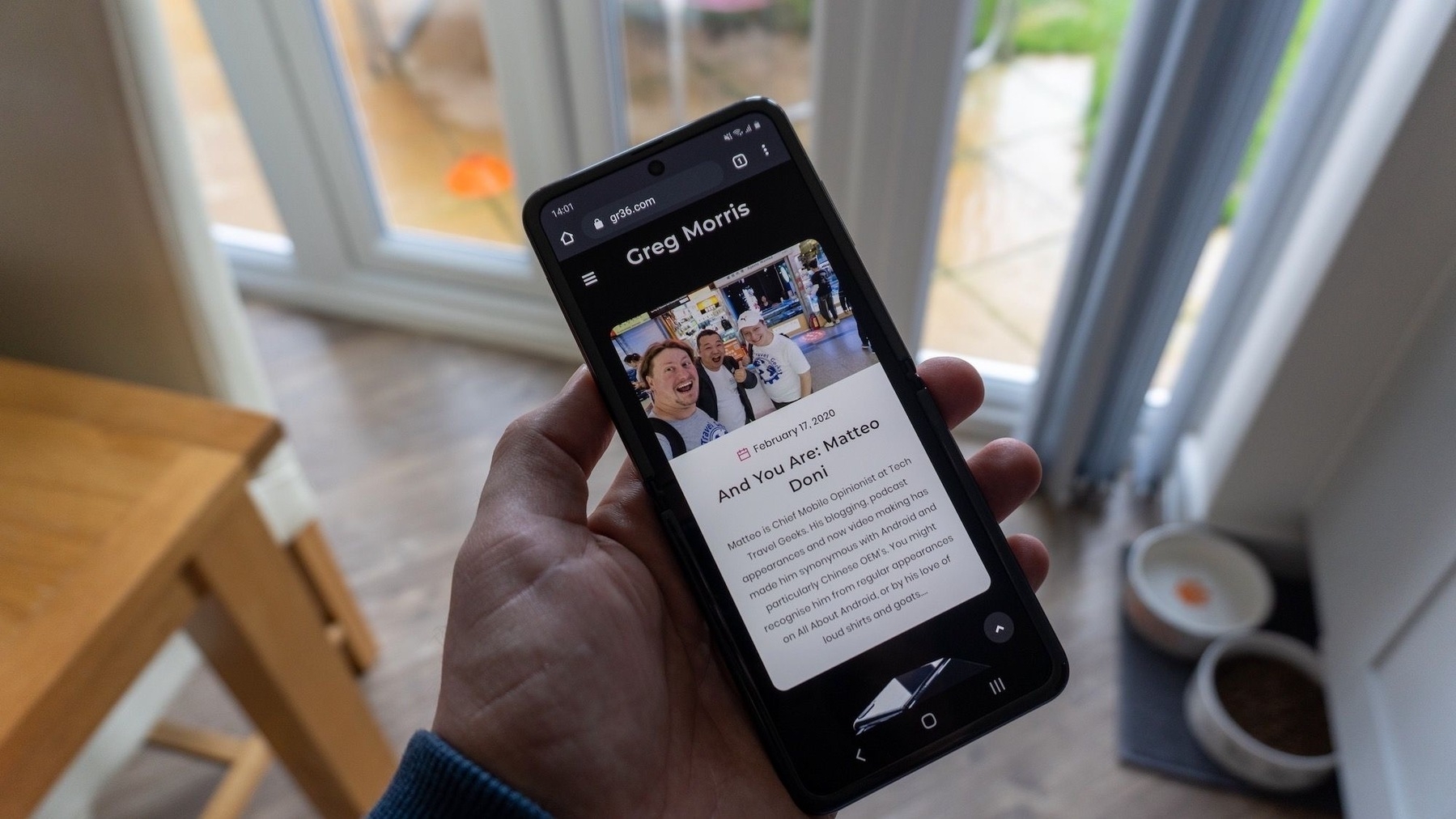 The only issue with scrolling vertically on this screen in particular is the crease in the middle. It is unavoidable, you can see it, and anyone that says otherwise is mistaken. It sticks out like a sore thumb, mainly when using a dark UI (which I much prefer) or when the screen is empty of content. Even if you get used to seeing the crease after a few days of use like the notch on the iPhone; you feel it every time you swipe around and if you want a folding phone you have to find a way to make peace with this fact.

That shouldn’t put you off though, the crease is unapologetic. It is there the first time you pick the device up and won’t go away. But it also shouldn’t get any worse, because it is purposely put there by Samsung in the factory, so it doesn’t develop over time. It doesn’t go as far as ruining your experience of the phone; it is just something that is a trade-off for having a folding phone at this point in time. If having a crease in the screen bothers you, steer clear, but it’s a worthwhile trade-off for being able to fold your phone in half and put it away.

While we are here, it seems logical to talk about folding the phone in half, because you won’t be able to stop – perhaps ever. The hinge gives tactical feedback but also provides a smooth transition. Samsung says its a semi-rigid hinge, allowing for it to be used in that weird half folded way that Samsung thinks will appeal to ‘influencers’. So gone is the click into place that Galaxy Fold had when opening, to be replaced by a more pleasant experience. Unfortunately, you won’t be doing the communicator flip open like the devices of old – well you can, but it doesn’t work very well.

There is also a finality of closing the Z Flip that you don’t get with other devices. Something akin to putting the lid down on your laptop. It draws a line under your phone usage and puts it away. It will help those looking to minimalise their phone usage because the screen is now away and out of tempting site. It’s not as if you can do anything on the ridiculous front screen anyway.

If Samsung are going for a way to minimalist your phone, they hit the nail on the head, because the front display is ridiculous. Perhaps not in a wrong way, but I wish they have thought about using it a little more. Not going as far as they did with the Galaxy Fold, but an active display similar to the Razr would have been perfect. You are not going to do anything with this screen except glimpse notifications when they come in and check the time. 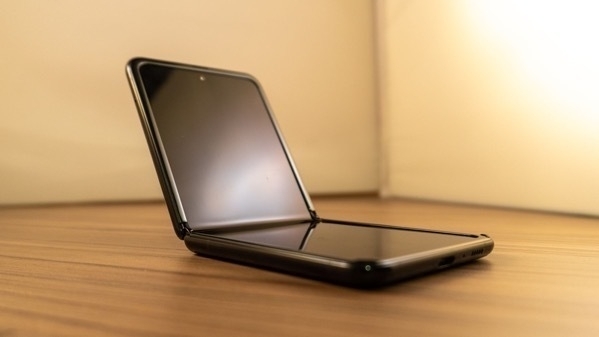 I don’t want to comment on battery life much further than to say that I don’t see any reason why it wouldn’t last you a day of usage. During my two days taking photos and playing with the phone, it still has more than 25% battery left after taking it off charge at 7 am. After a bit more usage, I will share full battery life expectations.

On the initial set up and test, I was disappointed with the performance of the camera, but there was a software update waiting for that improved things dramatically. I have a feeling this update is not installed on demo devices and some hands on versions I have seen, so perhaps take some video revews with a small pinch of salt.

I have to prefaces all my words with the fact I am not a fan of the processing done by Samsungs cameras. They often look overly processed sometimes downright ridiculous colour saturation in them. I prefer something much more natural-looking, and I am undeniably used to iPhone images.

As well as the usual family snaps, I took the Galaxy Z Flip with me on a day out to The Deep Aquarium, mainly because it is often one of the most challenging environments to get good snaps in. Dark rooms, with brightly lit tanks full of colourful fish that don’t stay still. I must say I am very impressed with its performance, not everything came out perfectly, but there were very few pictures I had to delete. At times I have often struggled to make Samsung cameras work for me, even as recently as the Note 10+ – having to turn features off and dial back processing – but this is not one of these times. Find a gallery below.


Galaxy Z Flip Around The Home

I am at a certain point in my life where each iPhone is as boring as the last one. I am excited by what other brands are doing and am always tempted to use something else but never do. I never want to say I will or won’t do anything else but switch back to an iPhone but using the Z Flip has opened my eyes to a brand new world. I enjoy the feel of having a much smaller device in my pocket and folding it out when needed – and to be honest, I also said this about the Galaxy Fold.

The Galaxy Z Flip is another step up in use case, a device that offers an improvement where the Galaxy Fold felt like you had to use gloves on it, but also an eye-opening form factor switch. The taller, slimmer screen is much easier to use and displays much of what I do online all day much better than anything else.

Pulling out the Z Flip leaves people around you genuinely amazed, and I have had loads of questions about it. Sure we are all aware these phones exist, but the general public doesn’t seem to be. Unfortunately, when showing it off, the black version I have is a fingerprint magnet, the same as the black Note10+ I had, so I spend far too much time is spent wiping off the body. The finish is also a bit too slippery than I would like, couple this with the smaller frame to carry and I feel a little uneasy using it outside. 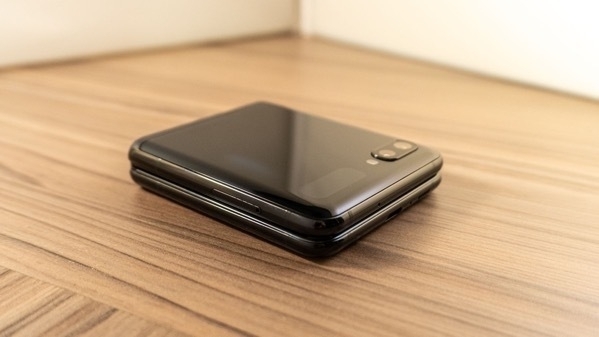 With all these words out the way – I am at a point as I write this that I am stuck at a Schrödinger’s phone. I both think the device is a game-changing smartphone and also a bit of a gimmick. Depending on the time of day, I am both marvelled and miffed at the Galaxy Z Flip. It offers me a use case like nothing before but is it worth a whopping £1300 price tag?

By far Galaxy Z Flip is the best folding phone you can buy. It is also a terrific smartphone that offers a brand new use case never before seen. I am just not 100% convinced that use case warrants the price tag or if it exists at all. I love using the Galaxy Z Flip because it is something completely new, but will that wear thin over time? Is this a solution to something that doesn’t need solving? These are all questions in my head and unique to each person.

What I woudl say is the dismissive feeling I have seen towards this phone are cimoletely unwarranted. This device feels like the start of something special and there is no denying it. I will try and answer the rest of the questions I have over the coming days – stay tuned.