Sure enough, just after deciding that my workflow of using Bear and Ulysses to write all of my content was pretty much perfect – I’ve changed again. For the past week I have been exploring using Apple Notes instead of Bear now that iOS11 is about to drop, and it seems to be working very well.

The Stock Notes app on iOS has rightly got a lot of stick over the years. There are some people that wouldn’t use anything else, but many more users simply require a much more powerful app. Bear has filled that gap for me since launch, making writing in markdown a beautiful experience and dead simple. However it always felt a little redundant paying for two subscriptions when they both do a very similar job. After learning how to improve lots of areas of my organisation through the Learn Ulysses course this was even more the case, so I wanted a replacement.

With iOS11 Apple have improved Notes in many ways to make it more user friendly. Filing has become much more simple, drag and drop works flawlessly and the overall speed and app experience is much smoother. These improvements make it much easier to jot down quick ideas, saves links to look at later and even do some drafting if your heat desires.

What’s more I can use Siri to dictate a note I quickly think of, and unfortunately Siri cant do that for every app at the moment. There is also the option to make hand written notes or annotations in line with text, add in images and lots of things you couldn’t do very well or the implementation was a bit clunky. One thing particularly useful is the ability to quickly launch the Notes app with an Apple Pencil double tap on the lock screen. 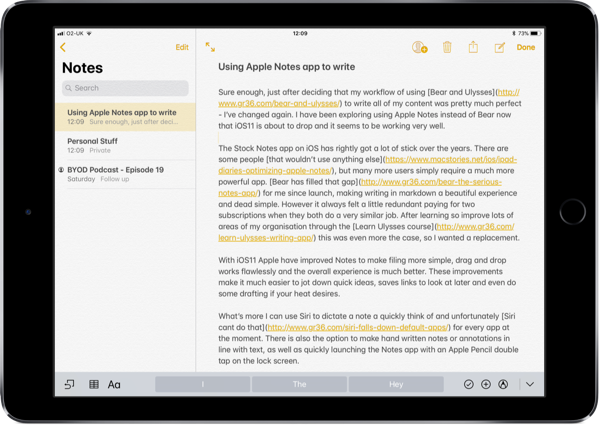 I still miss a few things that can be found in more powerful apps. Tagging being the main one, as there is no way to organise notes other than in chronological order from last edited or Alphabetical. Folders are possible, however going backwards and forwards between them is not an easy task on iOS. This is partly made up for by a very fast and reliable search function, which even understands your handwriting if you’ve made some notes with the Apple Pencil.

The worst thing for publishing is Apple Notes app insisting on using a weird version of Rich text so converting to markdown is a pain. I created an Apple Notes to markdown Workflow which automates the switch to Markdown, which is infinitely more friendly to work with for publishing. This Workflow also copies the resulting Markdown to a new sheet in my ‘ideas’ folder of Ulysses. I can then continue to draft this until I’m happy, add images and publish.

There is no X-Callback URL support in Notes what so ever, and the sharing of notes to other apps can sometimes go a little wonky depending on the app. However all in all the improvements made to app have made it a serious contender to be put back on many users main screen. 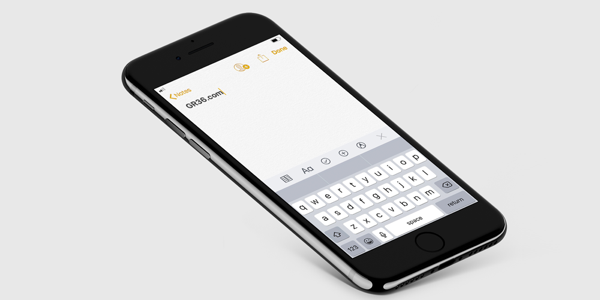 I would like to see more user features in upcoming versions of Notes, perhaps the ability to change the font to something more readable. Proper Rich Text would be much easier to use than the current implementation, but I’d really love basic text or markdown support – although I don’s see that ever happening. However I would edge you to give notes another chance and see if the improvements make your life easier.